Beading and other things

It has been a couple of weeks since I wrote anything and I have completed a decoration for a class. It is called sparkling ruffles and we had to amend the pattern quite a bit to make it fit our balls. I had three ladies do it at the weekend and they all enjoyed it immensely as this is the first netting stitch that they have done. I was most impressed with them all.
I have finished the stitching on Stephanie’s birthday present so now it is embellishment time and then to the making up stage. It has turned out much better than I thought and I have used quite different colours. The inside will be a wool material as this is great for parking needles. Hopefully this weekend will see that project on the completion table as Stephanie is coming home the following weekend for the long weekend.

Heart of the cabin has stalled but I can report that mum is continuing on hers and has completed square three so is onto her sixth square. I will get the needle book out of the way and then hopefully some stitched this weekend as the weather looks like being not great again.
Beaded Journal project – February is coming along and I have to visit Maree to get the next part drawn on. It should also be finished over the next weeks and then only three months behind. I think I will do something less esoteric for the next month.

Diane
Posted by Didi-beadwork at 5:23 AM No comments:

It has been a long week and it feels like there have been three Wednesdays, two Thursdays and not enough Friday already. I have stitched this week mostly on my friend Stephanie’s needle book cover so it is nearly finished. Just the last area to stitch and then to embellish and make up. I think I will hand stitch it together using some ultra suede for the inside in a pale green colour or else beige felt.

Mum and I have received notice that we have our classes for Columbus in September so that is exciting and I am looking forward to receiving the needs list or the stitching supplies. There is some pre stitching for both pieces I think.
http://www.needlepoint.org/Seminar-10/classes/4day/40223.php this is the four day class which mum and I are both doing so I am very excited.

Beaded journal project is going very slowly with February about half done and march thought about but nothing in print yet. I am hoping to get to some of that this weekend and also to spend time trying to make up bead kits for a class next week. Think I need a four day weekend.

Guild meeting was this week so I think that threw me out of sync. We had the national president with us for the night Margaret Erskine so that was really nice and no-one took a picture. We are having a workshop next weekend at my place as well.
Diane
Posted by Didi-beadwork at 5:26 AM 1 comment: 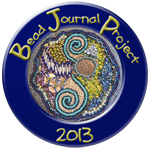